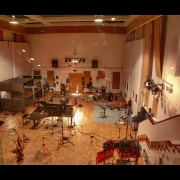 We have explored some of the factors that influence how a recording will sound from an acoustical perspective, and looked at how microphones pick up sound. That’s technical, but recording is much more than that. We will look at how the equipment affects the sound in later installments, but this time we are going to sit in on a typical recording session and get a sense of how it works.

Our example is in a recording studio, but the same factors apply to a location recording.

Maybe someone wakes up one morning and decides to book a recording session that day and goes in and makes a record. But that’s not how it usually happens, and an impromptu recording will only work with very experienced recording artists. The actual recording session comes after a lot of foundational work.

Let’s presume our artist has an avenue for distribution of his or her music already set up. This could be a record label issuing CDs (or vinyl), a streaming service, a download supplier, or maybe a personal distribution channel like SoundCloud or YouTube. The next step is to choose the material to record and enlist the aid of the people required to make it work.

Perhaps the most important decision of all is choosing the right music to record. Many artists compose their own music, but some do not and rely on other songwriters, collaborators, or composers to provide material. In our example, the artist writes songs, and has been doing so for a while and has many compositions to consider.
Who makes the decision on what songs to record? In the old days, a record label had a staff of “A&R Men” (they were always men), whose job it was to find good songs and match them up with an artist. That approach is largely gone, although it did work well for many artists in the past. Today, the decision is probably made by the producer along with the artist.

What does a record producer do, anyway? That role is somewhat analogous to a film director – someone who manages the shooting of all the scenes in a movie and keeps the process moving along while imposing their personal style on the project. The film director decides when a scene is properly performed and technically acceptable. The record producer’s job is similar, but the actual level of involvement varies considerably. Some producers just arrange the logistics of the recording session and have minimal artistic involvement. They may not even attend most of the session, if they have confidence in everyone involved in the process. Other producers rule the process with an iron hand.
They may write the song, pick the musicians, write the musical parts for every instrument and voice, and do take after take until they consider the performance perfect.

Most producers are in the middle ground between these two extremes. They will work with the artist, helping to pick the material and choose the musicians if necessary. They will schedule rehearsals to refine the performance, and then book the studio time. At the session, they will oversee all the details that make everyone comfortable and able to perform at their best, oversee the technical part of the process in conjunction with the engineers, and keep the session moving forward.

The producer also has to be a psychologist, always in tune with what is happening in the studio and sensitive to the needs of the performers, needs that often the performer does not even realize.

Recording is very stressful to many performers because they know they will be judged on their performance, perhaps for years or decades to come. They are also surrounded by professionals that are analyzing every note and phrase. That’s a lot of pressure and some artists view recording with as much trepidation as getting a root canal. The producer needs to make them feel at ease and relaxed, because tense, stressed-out people will not do their best.

This stressful environment can lead to conflicts, especially with performers with relatively little experience. The producer must defuse these situations and keep everyone focused on making good music. Differences in musical interpretation need to be resolved and the thinking “harmonized” so everyone has the same vision for the musical piece.
It takes a while at the start of the session for everyone to settle into the studio environment, and time for the engineers to place everyone and set up microphones. Engineers need the musicians to perform so they can set the proper recording level for every microphone and ensure that the sound is appropriate for the music

Once most of the technical details are settled, it’s time to run down the song. Often there will be sheet music provided to each player, sometimes very detailed and sometimes just a sketch of the song structure. Experienced studio musicians need only one or two times through the song before they have their parts worked out. Groups that play together all the time may need very little time for this stage.

The producer may have some input at this point and might spend time with the players making sure everyone understands the vision of the song. He may spend the first half of the session in the studio, working with the performers.

Usually the rundown versions of the song will be recorded, not for use, but so that the players can listen to it. This is the time when the producer and/or artist can refine the parts and discuss his or her notion of how the song should be performed. This can generate enthusiasm if everything is coming together beautifully, or a time to re-evaluate the parts and the playing, or even the instrumentation, and make corrections.

Now we are ready to start recording seriously, and the producer has to be sure that the playing is properly serving the song and mistakes are caught immediately. No one wants a song to be unusable because of some musical or technical glitch has ruined a take, and catching those requires attention to detail. At the same time, the producer must maintain an overview of how things are sounding, since it is frightfully easy to obtain a perfect performance that lacks the requisite emotional connection for the listener.

Next: The session continues.