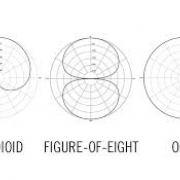 Last time we talked about the three basic types of microphones, based on their method of operation (the dynamic, ribbon, and condenser microphones). This time we will look at the directional patterns of microphones and how they influence the sound of a recording.

The ominidirectional microphone, (in theory) picks up sound from all directions equally. Our hearing approaches omnidirectional, so it would seem that an omni mic would offer
the most realistic reproduction of the original sound, and this is true to an extent. Many of the earliest stereo recordings were made with a pair of omni microphones spaced far apart, and this technique is still sometimes used today.

No microphone is truly omnidirectional, if for no other reason than the body of the mic itself blocks some of the sound reaching the diaphragm. However, omni mics are usually pretty good at having equal sensitivity around the plane perpendicular to their diaphragm.

The uni-directional mic ideally should respond only to sound arriving from the “front” of the mic, and reject sound arriving from all other directions. The ratio between the front and back or side response could be significant, 10-20db, but it is far from infinite. There will always be some sensitivity to sounds arriving from the “wrong” direction. And this would usually be an acceptable tradeoff except that most directional mics do not have uniform frequency response in all directions. They tend to have much better rejection of mid-high frequencies than low frequencies arriving from an off-axis direction. This can lead to some awful sounding recordings when a sound meant to be rejected is picked up despite it being off-axis. And the sound bleeding into the mic is probably going to be very bass heavy. Many directional mics have poor off-axis rejection of very high audio frequencies, further complicating the sound of the mic.

Directional mics can be designed to compromise the degree of off-axis rejection in return for a flatter frequency response to the off-axis sounds. The engineer has to understand these characteristics in order to obtain the best recording. For many of us, this is learned empirically over the years of using many mics in many different situations.

To be complete, we should note that there are some special-purpose mics designed for very high rejection of off-axis sounds. These are usually long and thin, and almost universally used for dialog recording for video and film. Those mics (often called “shotgun” mics) have limited use in music recording.

A ribbon mic has a natively bi-directional pattern, which means it is equally sensitive to sounds arriving from the front or the back of the mic. This works well for two performers facing each other with the bi-directional mic placed in between them. That’s not a common scenario, so why else would you choose a bi-directional mic?

This pattern, also sometimes called a “figure 8” pattern, has some unique characteristics that make it one of my favorites for many recording situations. The bi-directional mic has almost infinite rejection of sound arriving to the “side” of the mic. This is actually a plane of insensitivity that runs around not only the sides of the mic, but the top and bottom as well. Without getting too technical, this happens because sound arriving from the side impinges on the ribbon with perfectly equal intensity on both sides, and thus is unable to make the ribbon move at all.

These characteristics give the bi-directional mic a distinctive sound, one that I find very appealing.

We have three different principles of operation, and three different basic pick-up patterns available in our microphone choice. Are there more characteristics to consider? Well, those are the major distinctions between microphones, but why do they all not sound exactly the same if their characteristics match? There can be many reasons, too many to discuss here, but I will mention a couple of them.

All microphones require some type of case and grille to house the internal components and protect the diaphragm or ribbon from damage. The design of these mechanical structures has an effect on the sound.

The grille is usually metal, and perforated with holes or slots, or woven from heavy metallic wires. The openings are oriented to provide the least obstruction to sound arriving from the preferred direction, but as the sound moves around the mic, the geometry of the grille changes, perhaps even completely blocking access to the diaphragm or ribbon from some directions. Not only does the sound intensity perceived by the mic change, but the frequency response does as well. It is not difficult to picture how this affects the sound.

The frequency response of the microphone types is also different: the dynamic mic usually has relatively flat response in the mid-range, but falls off at the low and high end of the audio spectrum. The ribbon mic is generally flat, but response rolls off above about 10kHz. Most condenser mics have a broad “presence peak” from around 3kHz to 8kHz, giving them a characteristic bright sound. (Some of us would call it overly bright.) All mics can be designed to modify these intrinsic characteristics to some extent.

Another factor is that all directional microphone exhibit “proximity effect,” which is simply an increase in bass response as the mic gets closer to a sound source. (Omni mics are generally immune to proximity effect.) This can be a problem in some situations, or a tool to be used. Experienced vocalists can use proximity effect to change the character of their voice, often dynamically during a performance.

Many mics, so many possible characteristics to be exploited or avoided.

Next: What happens during a recording session?

In addition to this blog, I also do a podcast called “My Take On Music Recording,” which you can access at dougfearn.com, or through your favorite podcast app. This podcast is aimed at the recording professional, but I try to keep the technical jargon to a minimum. Some of the same topics in this blog are also covered in the podcast, with a lot more detail. I also have interviews with many of the top people in the recording world.

Your comments, questions, and suggestions are always welcome. You can contact me at dwfearn@dwfearn.com