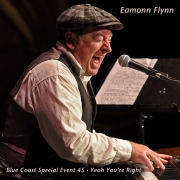 A few days ago I posted a challenge on Facebook to nominate an artist who would perform without click tracks, fixes or overdubs direct to DSD.  The response was wonderful.  The first artist to take the challenge was Eamonn Flynn.  For you music lovers, let me say that even the best players find this one of the hardest things to do.  Eamonn did a fantastic job.
Cookie Marenco -- Blue Coast Music

Recording Live in the Studio to DSD-
Eamonn Flynn
This post: “okay...  the big question... who out there is ready to record live and in the studio direct to DSD?  No fixes, no overdubs, no headphones... JUST LIVE” popped up in my Facebook feed. It was posted by Cookie Marenco an audio engineer who owns a studio and record label in Belmont, California just south of San Francisco. I’d recorded with Cookie before, producing and playing keyboards on two albums at her studio and I remembered her working some deep, warm sounding audio magic behind the desk. I knew she was fanatical about capturing great sound and great performances. I knew it was always a great and hilarious hang with her and Patrick her main engineer. I remembered the view from the hills of Belmont looking over Silicon Valley from behind her studio and one time seeing a family of deers come up to check out the music or more likely eat some of her plants. Within two minutes I had responded: ”I nominate ... ME”.

Two days later I was situated behind her Steinway grand piano getting ready to lay down eight of my new songs, one after the other, recording direct to DSD. I have always been a session and touring piano and keyboard player, supporting other people’s music. But a year ago I finally stepped out in front and recorded an album of my own songs and put a band together to play them live. The album was called ‘The Irish Channel’ and it was an amalgamation of my years playing both American and Irish music. People seemed to respond to it very well and I was having a ball in my new role as a ‘frontman’ so I’d written a new bunch of songs for a follow up album. I sat up the night before the session furiously finishing those last few elusive lyrics.

It was a little nerve wracking but mainly thrilling to record these songs live with no headphones and no fixes - just direct to unbelievably high quality digital audio. Cookie told me that I was a second take guy, the first take was a run through and the second take was the keeper. I don’t think we got to a take three of anything. I was having a great time playing my new songs on a beautiful sounding Steinway piano with no stupid click track or headphones to distract from just you know ... making music.
I think the essence of the live recording and relaxed atmosphere comes through in the resulting tracks. I hope that the listener enjoys the songs in the same spontaneous spirit that they were played and recorded. These are the basic tracks that will become my next album, some I will build on, some I will leave as is because they sound good and don't need anything else. Hopefully these recordings provide a behind the scenes insight into the process of writing and recording new music.
A little insider information about the songs:
Black Coddle: Coddle is a traditional Dublin stew made with sausages, bacon and potatoes. It’s usually white but back in the day when Dublin had some of the worst slums in Europe, they’d cook it over the fire and ash would fall into it turning it black. There’s a lot of other historical and literary references in this song including the 1916 rebellion - too many to go into - but hopefully the atmosphere and overall meaning come across...
Yeah You Right: A love song set in New Orleans.
Whiskey Bottle Tonight: Sing along alcoholic self pity!!!
Bruach Na Carraige Baine: a beautiful old Irish love song from County Kerry. Translation: the edge of the white rock. I ran it into another original tune that I don’t have a name for yet.
I Still Love The Sun: Elemental song about eh ... the sun. I don’t know what else to say about it because I don’t fully understand it! I ran it into an instrumental that I also don’t have a name for yet.
Porcupine: A James Booker inspired piano jam about unlikely friendships.
Bunch of Thyme: This is an old Irish song warning maidens to hang on to their virtue despite the efforts of lusty sailors and such. It was brought to America and New Orleans in particular and became the early jazz standard “Careless Love” as recorded by Bessie Smith, Fats Domino and Dr. John among many others. This version is a blend of both songs.
Morning Love: A Professor Longhair influenced jam about the delights of morning lovemaking with that special someone. I left room for a guitar solo. I will not name the guitarist I have in mind as I haven’t asked him yet but I’ve played it with him live and no one else will do...! Stay tuned.

Hopefully these notes give some context and enhance the listeners enjoyment of these tracks which for me were a very special recording.
Thanks and enjoy!