Fiona Joy Launches her SACD, Into the Mist, in the Sony Sponsored Magic Bus

Fiona Joy Launches her SACD, Into the Mist, in the Sony Sponsored Magic Bus 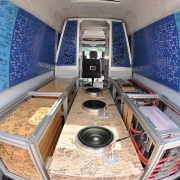 Los Angeles Sheraton was filled with audiophiles for the 1st annual LAAS Event.  Fiona Joy took the opportunity to try something new with her album release on Blue Coast Records... she gave a release party at the Sony Sponsored Magic Bus!

The launch event was held on June 3 from 3pm-5pm.  Rather than the usual concert to announce an album release, Fiona was inspired by Jon Whitledge's van audio enough to make arrangements for a party and release.  Outfitted with balloons, pink cupcakes, CDs, Vinyl and SACDs in front of the bus, it attracted the attention of hundreds who joined in on that sunny day.  Fiona brought the dress she wore to the party hung on a wire frame.

Inside the bus, Into the Mist was playing for the guests to enjoy and experience the magical sound DSD can bring.  Jon also had playing the DSD256 versions through the Sony Car Audio system.

Here is an excellent review from New Age Magazine.