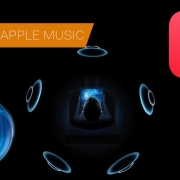 Apple brought Spatial Audio into our music world like gang busters with millions of dollars being spent on ad campaigns. Is Spatial Audio the rebirth of music the way iTunes ushered in the world of digital audio with devices, music and non stop ads? Is it really better?

There's a lot of controversy over the systems being used for creating and selling Spatial Audio. Spatial Audio is Apple's term for 'immersive sound'. Immersive sound is the language adopted by The Recording Academy to describe 4 independent channels or more playing at one time. It started with "Quadraphonic" for vinyl. Then came surround sound with the SACD about 20 years ago followed by Dolby Atmos. In the last few years, several other systems have been developed like Sony 360, Auro-3D and more. These systems can use upwards of 12 or more speakers all needing precise setup in a room to maximize the experience of the mix. The Recording Academy and AES have thrown it all into one bucket called "Immersive Sound".

Outside of a movie theatre which has the money to setup up a multichannel correctly, very few home listening systems are setup up as the specs require. Why? It's expensive to buy the gear, placement in a room can required a lot of space and construction / wiring costs can be frustrating.

I've been fortunate to sit in rooms with other recording engineers evaluating hundreds of immersive mixes side by side. Moving from quad to surround to Atmos to 360 is not an easy feat. All speakers need to be readjusted for each listening format... even the floating speakers above your head. It's an amazing feat even for the best multichannel engineers to correctly place speakers so how can this possibly make sense in a home?

Well, it doesn't for the most part. We saw surround's bubble burst. Dolby Atmos was confined to theaters for the most part. And then came binaural... the illusion of immersive sound in headphones. Not a great word for it, but that's what the commercial world settled for. Whatever you call it, the idea of an immersive experience in the headphones that mimicked speakers intrigued many of us to explore the idea. It still had its challenges but worth exploring.

Then came Apple's Spatial Audio..... with enough money in promotion, Apple will either kill immersive sound completely or will force all of us to make a change to Spatial as the norm. Like the move from mono to stereo. It could take decades but it's possible that the norm is binaural mixing.

The problem is the new equipment costs for recording studios and artists to create these masters correctly. So, expect to hear a lot of automated mixes with plugins that could be so off from a good stereo mix that the listeners stops listening to immersive sound. Immersive is not new, it's just not gone over in a commercial way with the mainstream listeners.

In the meantime, there are a lot of studio engineers who are going to 'wait it out' before making this substantial investment in new gear. Here's an example of what studio engineers need to learn about Spatial Audio to get a reasonable sound. Take a peak and see if you make it to the end of the article before giving up. There's a lot to learn.