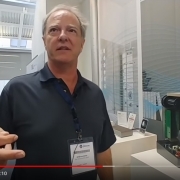 The voice is British speaker-design legend Andrew Jones of ELAC. The setting is the Munich High End audio show in May, 2018.

When DSD goes to PCM format for handling, the remarkable resolution potential of the DSD format becomes compromised, step-by-step. When it returns to DSD format for sale, the processing artifacts from the journey, into another format and back again, are left in the file.

Except for music recorded for Blue Coast Records by Cookie Marenco.

Marenco has developed a proprietary recording technique that captures live performance sound in DSD while avoiding PCM. The technique called E.S.E. (Extended Sound Environment) prohibits overdubs, the use of headphones and is recorded only to analog or DSD devices.  The DSD tracks (usually DSD 256) are mixed on an analog console where she adds any effects and makes volume level changes to individual tracks. The resulting stereo mixes are recorded back to DSD256 to stay in the DSD domain.

The highest-end equipment manufacturers know about Marenco and Blue Coast. Perhaps that’s why Marenco’s studio in Belmont, California features speakers, DAC converters and other gear awarded to her by elite makers. They like the idea that she has their gear and they particularly like to have tracks she recorded to demonstrate their equipment.

You can see the John Darko/Andrew Jones Munich interview here, starting at the exchange described above: