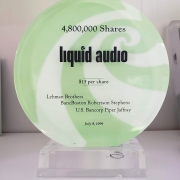 July 8, 1998...  Liquid Audio's IPO.  What was Liquid Audio?  It was the first company to offer legal digital downloads delivered worldwide.  I was fortunate to be part ot the crew that helped make history.  Liquid Audio was a software program that predated Napster and iTunes for delivery of audio files.  In a sense, we were the first aggregator for digital audio even though the word "aggregator" didn't exist.

Not many people know Gerry Kearby's name, but he is a man who changed history 2 times.  First with the introduction of digital recording on the Macintosh back in the early 80's (pre-dating was was then called Digidesign and now known as Avid, makers of Protools).  The device was the Dyaxis and later sold to Studer.  Later, Gerry came together with Rob Modeste and Phil Wiser to create Liquid Audio.  I'll never forget the first day Gerry called me into his office to tell me of this new software.

I believe there were less than 3 people in the company when the call came to me.  Gerry described sending digital audio as compressed downloads through the internet.  My mouth dropped and I was temporarily stunned with a chill going own my spine.  With some glee and fire I said, "Baseball bat to the knees of the industry!".  Gerry said, "Shhhhh.. don't say that.. we want to work WITH them.".  Sadly, the recorded music industry was slow to adapt and change their ways.  But, when the tipping point happened, change came quickly to the labels as we know today.

My role was to do demonstrations at events that included our recording the music live, uploading to the internet and making the music available worldwide in less than an hour.  The first demonstration was at UCLA in November 1997.  My assistant, Adam Lundeen, assisted at the recording.  Time passes and you forget the names of the artists you record.  I'll have to look it up and post.  :)  People thought we were from Mars.