The Loudness Wars -- What is it? Why we should care? How is mastering involved? Mastering Part Three

The Loudness Wars -- What is it? Why we should care? How is mastering involved? Mastering Part Three 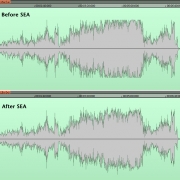 The Loudness Wars...  you may have heard about it ...  or maybe not.  What it means is the 'relative' volume of playback for any given song.

Relative Playback?  what does that mean?

If you've purchased discs mastered in the 1990's you may notice that you'll want to turn up the volume when you've just played a disc from the last 10 years.  Gradually, over the decades someone in marketing departments felt that the louder a record played back, the more it stood out from the rest.  Mastering engineers were encouraged to create louder and louder masters for replication.

This phenomena of "loudness" was adopted by the mp3 download companies since most mp3 came originally from CD masters.  Gradually over the years, all playback began to sound louder and louder.

The job of creating a "louder" record often falls in the hand of the mastering engineer.  While the mastering engineer works to even out the levels between songs on an album, it is often the case that all the music is brought up substantially... even if peaks are hitting the maximum before distortion.  There are several ways to achieve this and in simple terms... a "limiter" effect is added so that the peaks never go above the distortion level while bringing up the overall volume.

What does this do to the sound?  Plenty.  If you look at the wave form, you'll see a "flat topping" look where all the waves look like a pair of scissors gave the music a haircut at the top.  Not only does this change the sound of the instruments by making it appear louder, the frequencies at the top and bottom suffer with the loss of important overtones and peaks.

Dynamics are lost in favor of loudness and eveness.

Vinyl has not be subject to the same Loudness War phenomena ... maybe because when listening to vinyl, the listener is more active and able to adjust the volume per album.  Shuffling is not an option on vinyl.

In the meantime, we at Blue Coast Studios have developed a proprietary process we call SEA (Systems for Exceptional Audio).  SEA helps to restore some of the dynamics lost in overcompression and brings back some of the clarity and fidelity.  It's not a perfect system of restoration but so far, the artists we tested have enjoyed the results.  Our customers seem to like it as well.

The diagram shows the before and after wave files of the SEA process.  The top (before) shows the flat topping as the music gets louder (bigger waves).  The below graphic shows the same music where the SEA process has been applied.  The music is test was Doug Robinson's new album called "Dynamics".

More coming on this subject....