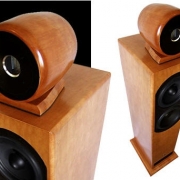 Recently the question came of what I use for mastering. It may comes as a surprise to know that mastering engineers don't all agree on how to listen or the processes involved. Even the loudness wars (louder sound vs more dynamics) has divided sides. I'll talk about my process.. the one I know. :)

In 1982 I opened my commercial recording studio. We recorded and mixed. Most of our mastering was sent to another facility at that time. During the 80's we were mastering for vinyl, which required a lot of specialized gear we didn't have room or finances for. We'd sent out our tape masters, sequenced with the spacing adjusted for each song. At that point, we didn't know enough to ask if we could have a test master to listen to. In order to save money, we would have the master sent to the manufacturer for the pressing and insertion of the disc into the cover. Funny, we'd get proofs of the art but not the master. We just trust that the engineer on the other end knew what we wanted to hear. I couldn't be more wrong.

In the late 80's, I was hired by Windham Hill Records as a producer and A&R person. They had a relationship with Bernie Grundman, one of the most amazing mastering engineers I've had known. Once, twice or even three times a month, I would be in Los Angeles at his mastering studio working on my projects for Windham Hill with an unlimited budget to make it right. The deadline I couldn't move, but the budget had no limits. Wow, I was enlightened to the world of "test pressings". None of this was fast. We often waited a week or more to get the test pressing of the vinyl. It gave us the opportunity to listen in our own room, on our gear to make sure we got the recording we wanted BEFORE we sent it off to the pressing plant. You didn't want to see the bill... in fact, I don't think I ever saw a bill from Bernie. NICE!

What a luxury. We always used speakers for monitoring. On a rare occasion, I might check something in speakers but mostly not. I knew I could listen on my own system at home and in my studio at a later date.

The transition to CD was a little more difficult. In those early days, test CDs weren't really possible... at least that's my recollection. We had to 'wait and see' after the manufacturing was done. No one quite knew what to do with the CD. Delivery to the manufacturers was on a 3/4" Sony video player called a 1630 (earlier models were the 1610, etc).

During the 90's, we came to mastering with DATs in hand instead of tape. Some people mixed to 1630 and a few continued on tape. I call the 90's the 'dark years'. We really didn't understand the consequence of mixing to DAT or other digital (don't get me started on the Sony F-1 craze, which I still own 3 video machines for playback). Everything went to 44.1 or 48 and we're all filled with regret. More regret that we recorded some of our music to digital multi-track systems instead of tape. Although, digital was very frustrating and slow for multi-track so I returned to tape. And the digital just sounded bad to me. Still we mixed to digital which meant that mastering in digital for CDs was inevitable to cut costs.

I worked primarily with Bernie Grundman and David Glasser at Airshow mastering. Those were two mastering engineers I could trust had the same ears I did. Believe me, not every mastering engineer hears the same way... let alone has equipment setup that sounds good. I won't get into the problems, but it became evident that in order to get back a master that sounded good and was delivered on time, we had to do our own mastering. In the mid-nineties, we did much of the mastering for our projects in our own studio. Our knowledge of tape also brought in a lot restoration work. We restored Thomas Dolby's "She Blinded Me with Science" and recordings for the Tubes, to name a few.

In the 2000's we began to take in more outside projects for mastering and the last decade, our focus on high resolution audio and tape has brought us a lot high end projects. We now have a remastering process called SEA (Systems for Exceptional Audio) that transforms any audio into a DSD256 through a carefully detailed analog process.

I use one set of speakers to do the majority of our mastering work. Those are the JMR (Jean Marie Reynaud) Offrandes. Then, I listen to 5 sets of speakers, 3 different rooms and 2 sets of headphones to test a final mix or mastering. The Sony AR-1s are great for that and are in a separate room. I also use NHT M-60s. I have a 3 sets of Yamaha NS-10s but haven't used them in years now that the M-60s are here. Other speakers are the JMR Orfeo's, Genelecs, and of course, my Auratones (aka 'the car speaker equivalent'). Yes, I do have even cheaper computer speakers I test on. The 2 sets of headphones I use are not colored like many headphones today, but older pro headphones.

The stopping point is the client's budget or a deadline. It seems that there is always something one can do better. :) A mix or master is never quite done... especially if you own the recording as we do with Blue Coast Records... I'll be remixing and remastering those the rest of my life. :)