Microphones - #8 An Overview of the Basic Types

Microphones - #8 An Overview of the Basic Types 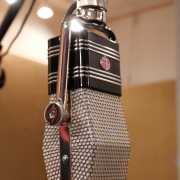 There are hundreds of professional microphones to choose from, and all have different characteristics and each model sounds different. We can divide these microphones into three basic operating principles, and look at the strengths and weaknesses of each.

The earliest microphones were developed for the telephone system and used a capsule of carbon particles, which were compressed by sound impinging on a diaphragm, varying the resistance. This works surprisingly well over the frequencies needed for speech, 300 to 3000Hz. But carbon microphones are terribly noisy, ruling them out for serious recording.

A goal of researchers up through the 1920s was to develop a “dynamic” microphone, which eliminates many of the problems of carbon mics. A dynamic mic utilizes the principle of generating a voltage by moving a conductor through a magnetic field. This is how 99% of the electricity you use is generated, in the form of a dynamo, also sometimes called a generator.

A microphone is obviously on a much smaller scale, but the principle is the same: move a conductor, which is coupled to a diaphragm exposed to the sound, through a magnetic field to generate a minute voltage. Simple in theory, but impossible until the 1930s due to the lack of sufficiently powerful permanent magnets. Once magnet technology caught up to the need, dynamic microphones became practical.

In the dynamic mic, the diaphragm is made of a thin plastic material, typically about a half-inch in diameter and mounted in such a way that it is free to move slightly in response to sound waves hitting it. The diaphragm is mechanically coupled to a cylinder of very fine wire wound with many turns and surrounded by a powerful magnet. The movement of the coil in the magnetic field generates a voltage that is an electrical analog of the original sound.

If there was a holy grail of microphone researchers in the 1920s, it was the ribbon mic, also known as a velocity microphone. This is technically considered a dynamic microphone and works on the same principle of moving a conductor through a magnetic field to produce a voltage. But the ribbon mic dispenses with the diaphragm and the coil of wire and places a strip of conducting material in the magnetic field. This strip is not only the “wire” but also the diaphragm. This is about as simple as it gets, and results in a splendid microphone design that is still used today. The “wire/diaphragm” in the ribbon mic is actually a strip of vanishingly thin aluminum foil, one to two inches long and 0.1 to 0.4 inches wide, under slight tension, within the field of a powerful magnet. The low mass of the ribbon material allows this mic to respond instantly to the sound hitting it, minimizing the inertia of a heavy diaphragm and wire coil of a dynamic mic. To me, the sound of a ribbon microphone reproduces the actual sound with more fidelity than any other type of mic.

Ribbon mics enjoyed a long career but were supplanted in the 1950s by newer technology and largely forgotten. There has been a resurgence in appreciation of the ribbon mic since around 2000, and several new manufacturers have revived classic designs, improved on them, and they have also issued entirely new designs.

Ribbon mics have some disadvantages, however. They are quite fragile and the ribbon element can be deformed or destroyed by any air movement. They cannot be used safely outdoors, and even moving a ribbon microphone too quickly through the air can damage it. Also, the output level of a ribbon microphone can be very low indeed, requiring a lot of gain in the microphone preamplifier, which can lead to an unacceptable amount of electronic noise, when recording quiet sounds.

The condenser mic utilizes a diaphragm similar to that used in a dynamic mic, but it does not require mechanical connection to anything else, so it is lighter and can respond more quickly to sound. The diaphragm is a disc of very thin plastic sheet coated with an incredibly thin layer of a conductive metal, usually gold. This forms one of the two plates of a capacitor. The other plate is a heavier metal disc spaced quite close to the diaphragm. (The term “condenser” is an old name for what we now call a capacitor, but the condenser name has persisted in microphones.)

Sound impinging on the diaphragm causes it to move slightly in response, which causes a minute change in the capacitance. This change is an analog of the sound wave hitting the mic capsule, and through a vacuum tube or transistor is coupled to the outside world. This is a very simplified version of what happens, but further detail is left to your own research.

Condenser microphones require a source of power to enable the circuitry, and provide the relatively high voltage the capacitor element needs to function. This is especially complex for a vacuum tube condenser mic, which requires multiple voltages to operate. A separate power supply unit is positioned near the mic, usually next to the microphone stand, to supply these voltages.

Solid state condenser mics require a single, lower voltage power source, and a clever scheme allows both the audio output of the mic and the DC power to connect through the same mic cable.

Condenser mics are the most prevalent type found in recording, and have the most model choices. Vacuum tube versions are often preferred by many engineers, and fortunately those mics are still made and the tubes are available.

Three microphone choices are available to the recording engineer. But that’s not the end of the story on mic selection, which we will explore next time.

Next: Microphone pickup patterns and other considerations in choosing the best mic for the sound to be recorded.

Note: An expanded version of this article is available on the “My Take On Music Recording” podcast. You can access that and many other episodes at www.dougfearn.com