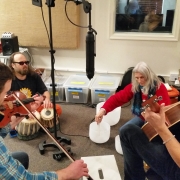 Let's take a look at the series of steps that music goes through from performer to listener. This is a simplified version, since real-world recording is usually a lot more complex than this. And for our example, we are going to use a very basic performance: a singer, who also will be playing an instrument (e.g. guitar or piano), and the performance is taking place in a purpose-built, professional sound recording studio.

We will study the various steps in this process in greater detail in the future, but let's get started with a minimalist recording setup.

Our chain of steps starts with the performance in the studio, the sound goes into a microphone (or microphones), is amplified and is recorded on some medium (these days usually a hard disk drive on some sort of computer). The resulting recording may be manipulated later to enhance it or correct defects.

Then it goes to a distribution process, which could be a physical medium such as a CD or vinyl disk, or it could be a streaming service, or a download provider like Blue Coast Music.

The music is then selected by the listener, who uses some form of electronic device to play the recording. This could be a turntable or CD player, or a digital player, all of which convert the electronic data into an audio signal.

The audio signal is amplified and goes to speakers or headphones, or earbuds.

Finally, the listener enjoys the music "exactly" as it was performed.

Let's agree on one thing before we delve into the recording process:

The most important parts of this process are the person making the music and the person listening to it. Everything in between may enhance, or degrade, the original performance, but that is overwhelmed by the emotional connection between performer and listener.

If the listener does not like the music, nothing else matters. It is not going to be a satisfying experience. It could be beautifully performed and recorded, and the listener could have a stellar system for listening, but if there is no emotional connection with the music, the listener will likely turn it off and listen to something else.

Recognizing that reality is key to a successful recording. There is a reason why the overwhelming majority of music released to the public never attains any traction.

In my career I have recorded just about any style of music you can imagine. Some of it was exceptional and I still enjoy listening to it. But most was mediocre at best.

You might think that sounds like a grim way to make a living, and it could be. There is tremendous washout and burnout in the recording industry. My way of coping with music I did not enjoy was two-fold: do the best job I could to make that music effective, and try to find something in the performance to like. (I am fortunate that at this stage of my career I can choose to work only on what I think is the best music.)

I also learned early on that my opinion does not matter. Every song is somebody's favorite. As a recording engineer or producer, you have to treat every session with equal respect and do the best job you are capable of to capture that music.

Next we will start our investigation into those important steps between performer and listener, starting with the space where the recording is done.