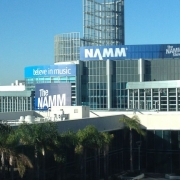 Positive Feedback is publishing a series of articles written by Blue Coast Music founder, Cookie Marenco, on the various audio shows.  Part 1 in this series provides the difference between the Consumer Electronics Show 2018 (CES held in January) and the National Association of Music Merchants 2018 (NAMM held two weeks after CES in January).  Here is the link to read the full article.

Here is an exceprt:

For an audio engineer or someone in the music industry, January was and is a month filled with conventions you don't want to miss. Sundance film festival, CES, Midem (now moved to June) and NAMM are on our dance cards if we can manage. We've also got the Grammys, football playoffs, end of year tax filings, and recuperation from 6 weeks of holidays. It's hard to choose when it comes to deciding which event to drop.

The last 10 years we've moved our attention to going to the high-end conventions and cutting out just about everything else. It's very satisfying to be with music lovers and manufacturers who appreciate the level of work we do. Appreciation for high-end recording doesn't happen at the other events. We'd go to an occasional CES show and as others have noted, it's not really the place for a growing audience interested in high-end audio.

and an excerpt about the NAMM show:

And the good news... 100% of those who listened could hear the difference between DSD and CD quality. We collected more cards than ever, met artists recording in DSD and for the first time, found enthusiasm with young audio engineers from every genre of music. Since the show, I've been besieged with emails from musicians, engineers and producers wanting to be involved in high-end music.