Recording an Orchestra #7 -- by Doug Fearn

Recording an Orchestra #7 -- by Doug Fearn 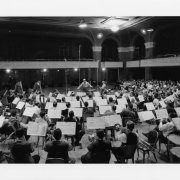 Our discussion so far has looked at the recording process as it occurs in a recording studio. But, with rare exceptions, studios are not large enough nor acoustically suitable for recording a symphony orchestra.

Consequently, most classical recordings are done “on location,” which might be a concert hall or other large venue with suitable characteristics. Music that was composed to be performed in a concert hall should logically be recorded in that environment.

But like everything in recording, it is not as simple as it might seem. As an example, the Philadelphia Orchestra was based in a wonderful mid-nineteenth century hall modeled after the great opera houses of Europe, the Academy of Music. I grew up listening to music in that venue, and it undoubtedly has influenced the sound I like to hear from an orchestra. But in the 1950s, the record company thought that the Academy of Music was too “dry” sounding – it did not have a reverberation time that was considered long enough for recording. This is an artistic decision made by the record producer and others, for better or worse.

Most of the recordings of the Philadelphia Orchestra during the 1950s and 1960s were done in a nearby hotel ballroom (the Broadwood Hotel, a few blocks from the Academy of Music). This space was large enough to accommodate the one-hundred plus musicians, and a choir, if needed. The space was acoustically very nice, and the ballroom was a good choice.

Let’s look at some history to gain perspective. For the first forty years of recorded music, the process was entirely “acoustic.” A large horn was used to capture the music, which was funneled down to a diaphragm, which was connected to a stylus, which engraved a facsimile of the sound onto a rotating disc. The system was quite insensitive, and the musicians had to huddle around the horn to provide enough energy to make the process work. Balance between the instruments was achieved by placing the loudest in the back and the quieter ones very close to the horn. The frequency response of this system was uneven, and that also affected the apparent balance between the instruments.
Around 1927, a new technique became practical, utilizing a microphone that was intensified by vacuum tube amplifiers driving an electro-mechanical “cutting head” that engraved the sound onto a disc. This system was far more sensitive, and the frequency response was much improved over the acoustic recording technique.

It was technically possible to combine the sound from multiple microphones, which was sometimes done, but usually only one microphone was used, placed in an optimum location for the best balance of the instruments and the desired ratio of direct to reverberant sound. This was largely the norm into the 1950s when the first stereo recordings were made.

It was the introduction of the magnetic tape recorder that allowed stereo to be practical (theory, and experiments, with stereo go back to the late nineteenth century, but there was no practical way to provide a stereo recording to a home listener). However, up until the mid-1970s, when stereo was practically universal for the consumer, all recordings were made with the monophonic version as the primary goal. Often a stereo recorder would be run in parallel with the mono recorder, but this was still considered experimental until the 1960s. Stereo, of course, required a minimum of two microphones.

The usual technique was to use two spaced microphones for stereo, plus a single mic in the middle for the mono recording. The mics were just in back of the conductor, and elevated quite a bit above the floor.

As we saw earlier, multiple mics picking up the same sound will have some serious problems when combined into a mono signal. (Hence the separate mono mic.) But if heard only in stereo, the sound of spaced microphones can be quite pleasant and realistic.

However, if you are seated in a concert hall the “stereo” image you hear of the orchestra is not particularly wide – certainly not as wide as typical classical recording makes it seem. However, at your seat, you hear not only the direct sound from the instruments, but also the enveloping reverberant sound of the concert hall, which comes to you from all directions. This is impossible to duplicate in a two-channel (“stereo”) system. Even multi-channel recording and reproduction does not perfectly duplicate the experience, and those systems are impractically expensive and complex for the average listener.

One solution is to make up for the lack of “surround” sound by making the stereo image somewhat exaggerated. The result is a satisfying listening experience, but it does not duplicate what you would hear in a performance.

We have to accept that we cannot replicate the concert hall in our living room, no matter the technology we have available. But we can provide the listener with a very satisfying version of the performance. It’s different, just like the studio recording sounds different from what you would hear standing in the studio. We have to accept the futility of perfectly imitating reality and focus on making the recording convey the emotion of the music, and the performer’s intention, to the listener.

Many classical recordings in recent decades have utilized some of the modern studio techniques, while still recording in the concert hall. Multiple microphones, each recorded to a separate track for future manipulation have become the standard for many record labels. The levels of the individual microphones can be varied to accent a featured instrument. The balance of the orchestra can be changed to suit the vision of the producer. Artificial reverberation can be added to augment or replace the sound of the actual recording space.

Or we can return to the original concept of the single-point pickup, using just one microphone, optimally positioned, to capture a truer image of what transpires. Usually this single microphone is actually two microphones placed in close proximity for stereo, which avoids the frequency response anomalies introduced when spaced microphones are used. These stereo mic’ing techniques will be discussed in another installment.

Most of the orchestral recordings I have done utilize a single stereo microphone behind the conductor by ten feet or so, and up around fifteen to twenty feet from the floor. I also record a pair of additional microphones spaced widely (fifty feet, typically), and placed roughly halfway back in the hall, which can be blended in as needed to improve the sense of venue. Alternatively, if the spaced mics are impractical (or in addition to them), I’ll use another stereo mic about two-thirds of the way to the back of the hall, facing the back wall. These three different perspectives give me several options for assembling the final recording.

Next we will look at some of the microphone characteristics and how they affect the recording.

You may be interested in the podcast, "My Take On Music Recording," which covers topics similar to what you will find in this blog. The podcast goes into more detail, and is often more technical, but still appropriate for many readers. See www.dougfearn.com for details and links.