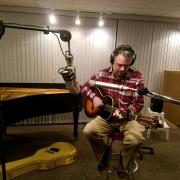 NOTE: Some of the previous installments in this series have also been posted in a video version. You can see video illustrations of many of the principles discussed in this column. Go to:

and if you find these videos useful, please subscribe.

We have a properly-constructed and acoustically-treated studio and it’s time to record some music. We will start with a very simple performance: a singer playing acoustic guitar.

Our first task is to determine where to place the performer in the room. This can be more complex than it might first appear, because many factors need to be considered. Some are technical, some are artistic decisions, and some are psychological.

Psychological? Yes, the recording process is at least as much about making the musicians comfortable and getting the best performance from them as it is about the technology. Annoyed or uncomfortable people are not going to perform well in most circumstances.

We want to place our performer in a location that is acoustically appropriate for the music. In the simplest terms, this means not too close to a wall, and away from areas of known acoustic problems (present in almost all studios). The distances to sound-reflecting surfaces can be important. The location has to be comfortable for the performer, which may take into consideration the lighting, sightlines to the control room, seating, temperature, air movement, feng shui, etc.

Now it’s time to place a microphone or microphones for capturing the music. There are hundreds of professional microphone models available, and many highly-prized vintage mics that could be 80 years old. What goes into the decision?

In all cases, the music drives the choice.

You might think that the microphone with flattest frequency response would be the right choice, but flat-response mics tend to sound uninspired on many sounds.

But isn’t the goal to perfectly capture the performance? Sometimes that’s true, but not usually, since we want to provide the listener with the best possible experience. A “snapshot” of the music is unlikely to be as good as the carefully composed photograph. And that means matching the microphone to the music.

Every microphone model has a distinctive sound. (There are many microphone characteristics, and we will examine them in detail in future installments.) It is the task of the recording engineer to choose the best microphone for the sound to be recorded, with that instrument, on that day.

The day matters? This illustrates the seemingly endless variables encountered in the recording process. I learned early in my career that you can set up a session so that it sounds just the way you want it, leave everything exactly where it was when you ended, and come back the next day and everything sounds different. Why? Well, some of the variables include the temperature and humidity in the room (usually well controlled in a good studio, but still slightly different), the changes in the instruments from day to day (did the violin just come out of a hot car?), and psychological changes in the performers from yesterday to today. Your hearing can change dramatically over a period of hours or days, especially if you were monitoring the session at a high sound level. There has also been an extension in context since the session the day before. The engineer might now have a greater insight into the music, and the performers may be more comfortable with the process. Everyone has had the opportunity to think about the recording, and the musicians may play differently and the engineer record differently, compared to the day before. All of these things can affect the sound of the recording.

Consequently, I view each day of recording as a new session, even if it the same project. It may require changing any of the variables to find the sound you want. It’s still science: there are just too many variables to control, and probably some variables we do not yet understand. But it is also an art, since finding the right sound for today’s session will always be a challenge, even for the most experienced engineer.

The engineer probably has some ideas about what type of microphone to choose, since typically he will have some familiarity with the project. His best guess for a mic might be perfect the first time, but sometimes it takes a few tries to find the right one. Often engineers will set up several candidate mics, ready to move into place if the first choice is not right. Multiply this by the number of mics used in the session and the complexity quickly builds.

That microphone choice might be perfect for the piece of music being recorded, but a different song may require an entirely different approach.

Also having a major impact is the distance from microphone to the instrument or voice. As the microphone is moved farther away, the ratio between the direct sound and the reverberant sound of the room will change. Very close mic’ing will reduce the reverberant sound of the room significantly, while moving the mic farther away changes the ratio, making the room sound more prominent. This is one tool the engineer has to modify the sound right at the source, and it is a decision that cannot be un-done later.

We are only considering one microphone is this scenario, which is rarely the case in actual recording. The amount of sound from one instrument or voice getting into the “wrong” microphone is also a huge consideration in the session. One extreme is to use one microphone to record everything, which can work very well in certain circumstances. But the single-mic technique requires an excellent acoustic space, and a musical ensemble that is naturally well-balanced. (Watch this video example of single- vs multiple microphone recording.) It would be challenging, if not impossible, to do this with a rock band with electric guitars and drums, and a vocalist. In the studio, you probably could not even hear the vocalist under those circumstances. (Another time, we will explore how those records are made.)

Next we will see why multiple microphones present a challenge, and methods used to mitigate the problem.