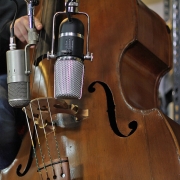 Our session is simple: a singer playing guitar. We have chosen a microphone that best captures the singer’s voice, but what about the guitar?

We can place the microphone so that it picks up both the voice and the guitar in the proper balance, but that might not be the optimum placement for the desired direct vs reverberant sound we want. The performer might sound too far away for the intimate feel of the song, for example.

In that case we have several options. Here are two: we can modify the acoustic environment in the vicinity of the performer, or we can use two separate microphones to capture both the voice and the guitar optimally without including too much of the “room.”

To change the acoustic environment, we can place sound absorbing baffles (sometimes call “gobos”) around the performer, to create a less reverberant space in the larger studio.

Using more than one microphone in this situation creates a new problem. The voice and the guitar are in close proximity, and neither can be considered a point source. The voice does not just originate from the mouth; much of the upper body is involved in producing the sound. The guitar is not just projecting from the sound hole; the entire body of the guitar radiates the sound, and even the player’s fingers on the neck of the guitar contribute to the sound.

We cannot pick up solely the voice or solely the guitar with each microphone. There is always going to be some sound of the vocal in the guitar mic and vice-versa. Therein lies the problem.

Whenever you have two microphones picking up the same sound, there is going to be some modification of the sound due to the spacing between the microphones. There is a finite amount of time it takes for the sound from each source to get to each microphone, and that difference in arrival time causes some of the frequencies to be cancelled out and others to be accentuated. The variation in frequency response can be severe: 20dB is not unusual. The result is a sound where both the vocal and the guitar sound unnatural and unpleasant.

Is there a way around this problem? Well, the perfect technical solution is to record each sound independently, at different times. That way you have total isolation between the two sounds. This is often done, but for many performers, the song was written to be sung and played simultaneously, and asking the artist to record just one without the other is unlikely to result in a good performance. It’s too unnatural.

One solution is to record both vocal and guitar at the same time, ignoring the deficiencies, and then go back later and replace the guitar part with a new version, recorded all by itself. Then the same is done with vocal. The original versions are discarded. The technology to do this has been available since the 1950s, and it is widely used. Experienced performers generally have no problem with this approach, and often it results in a better performance since the singer does not have to devote mental and physical energy to playing while singing. And yet the original feel of the performance is largely preserved since the performer is singing along with his or her original version.

Does this technique capture the feel of a live performance? It is almost certainly going to be different, but often the technical superiority of the separate recordings will provide a better experience for the listener.

Some performers have such a nice balance between their singing and playing that it is possible to record both at once. This requires microphone techniques that minimize the leakage between sounds. It is never perfect, but sometimes acceptable.

Another factor in a studio recording is that there is unlikely to be an audience. Performers often get energy from the audience, watching and feeling how the listeners react. This will certainly affect the way they play and sing. The studio is a much less inspiring venue for a performer, and this can be a detriment to the music.

But we have to think of recording as a distinctly different process than performing before an audience. Both are valid, just different. Performers experienced in the recording process are able to overcome this unnatural situation. And some performers do not need an audience at all; their artistry is self-contained.

Thus far we have considered only a very simple recording scenario. Usually there are additional musicians involved, and recording them all together means capturing an energy that would not exist for a solo performer. It is always a joy to me to be present when a group of talented musicians suddenly start working as a unit, drawing energy and inspiration from each other, and creating astounding music.

So an ensemble performance is usually best. But if we encountered a problem with sound being captured by just two microphones, our challenge is compounded when we have many microphones.

Ideally, the performers are unencumbered by the recording process and they have perfect auditory and visual contact throughout the performance. But sometimes the technology gets in the way, and we have to displace the performers in either time or space. Displacing them in time means recording their part later, as in our singer-guitarist example. Displacing them in space means we have to acoustically isolate one instrument from the other, and this is done with those acoustic baffles, or by putting instruments in separate “studios.” This is often done with independent soundproof “isolation booths,” built into larger studios.

Interestingly, some of the world’s best studios do not have isolation booths and still create amazing music. A good acoustic space can permit a certain amount of “bleed” from one sound into multiple microphones and still sound great. This can be attributed not only to superior acoustics but also to remarkably talented engineers. And we cannot discount the contribution of the performers, either. Their appreciation of the technical challenges, and experience in working under unnatural conditions, makes this approach work.

So far we have been considering music recorded in a studio. Next we will look at the advantages, and challenges, of recording in a concert hall.