Understanding the Recording Process -- Part One in a continuing series by Doug Fearn of D.W. Fearn fame

Understanding the Recording Process -- Part One in a continuing series by Doug Fearn of D.W. Fearn fame 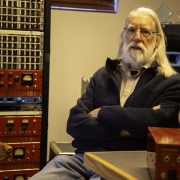 The first time I pushed the "record" button on an Ampex tape machine was in 1963. It was at the FM radio station of my high school. The station had an excellent collection of professional broadcast equipment, and expert guidance from broadcast professionals.

I was recording a concert by the high school orchestra, for later broadcast. I was not happy. It did not sound at all like what I thought it should sound like.

My experience prior to that point was with live performance of a symphony orchestra. My father played in the Philadelphia Orchestra, and I grew up in that environment, attending concerts on a regular basis, and often accompanying my father to rehearsals. I could wander around the Academy of Music in Philadelphia and listen to the music from many vantage points. I even sat on stage with my father in the French Horn section and heard what the orchestra sounded like from the inside.

My father did not like recorded music and never listened to it. In fact, we had no records at all in our house. I was not really exposed to recorded music until I was in high school.

But my recording didn't even sound as good as it sounded in the cinderblock auditorium. What was wrong? How could I make this better?

Well, I have to say that in all the decades that I have been recording, what I hear in the control room is never like what it sounds like in the studio. I have never been fooled that something was live when it was actually recorded. And that's OK, as I hope to explain in this series of articles.

We can use the visual arts for comparison. A snapshot photo is like a simple recording. Both are meant to capture the reality as well as the recording medium can do so. And both a snapshot and a basic recording can do that very effectively on occasion.

But what if the photographer spent some time finding a good vantage point? What if he framed his photo with artistry instead of just making sure everything necessary was included in the frame? That will probably be a better photo, although it may lack the spontaneity of snapshot. Both are valid, and both can be effective.

For recording, the engineer can spend some time figuring out the acoustic environment: where does the music sound best? Where in the space is there perfect balance of the instruments? He can "frame" the sound to showcase it in the best light. That may no longer be a perfect representation of the performance, but it will almost always improve the listener's experience.

Taking this one step farther, what if the photographer used technology to further enhance the photo? He could use lights, reflectors, and other techniques to make the photo better. Similarly, the engineer can use microphones placed strategically to enhance the sound of certain instruments, she can add sound absorbers to reduce the effect of an unpleasant echo, or hard surfaces to brighten up the sound of some instruments.

The photographer can use "darkroom" techniques, which are now done almost entirely on a computer, to further refine the photo after it is taken. He can crop the photo to eliminate distractions, manipulate brightness, contrast, and colors to enhance the picture.

The engineer can do similar things to a recording. Equalization manipulates the frequency content, making things "brighter" with more high frequencies, or "bassier" with more low frequencies. Other techniques permit her to alter the sound to enhance it, or other tools to reduce defects in the recording or in the performance. Reverberation can be added to simulate a different acoustical environment, or compression can be used to reduce the dynamic range for a better listening experience in less-than-quiet environments, such as in a car.

Taken to an extreme, the photographer can manipulate the photo with techniques that make the image something entirely new. Or even abandon the photographic process entirely and use a different visual art, such as painting, to create a new reality, perhaps one that exists entirely in the artist's imagination and has no real-world equivalent.

The same can be done with sound. A recording may be manipulated using a huge range of extreme processing techniques to completely change the character of the sound. Or sounds which never existed in nature can be created electronically.

All of these approaches are valid artistic techniques to achieve an artistic goal. At one extreme you can be a journalist, attempting to tell the story as objectively as possible. Or you can create something entirely unique, a product of the creative mind.

Actual recording in the twenty-first century is typically somewhere in the middle of this continuum.