What is AMSR and why is it so popular?

What is AMSR and why is it so popular? 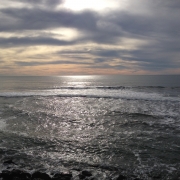 AMSR stands for autonomous sensory meridian response -- that's the long version for "natural sounds".  The current trend uses the sound of whispering, opening beer bottles, birds chirping or any other sounds that occur in nature.  Crinkling paper has had millions of views on youtube.  Some say it helps one to fall asleep.  Others look for a tingling sensation.

Many of today's AMSR artist can be found nestled between two SM-7 microphones on a table top whispering poems or selling anything from cosmetics to beers. Back in the 1980's Seven Up ran an infamous campaign to find someone who could synthesize the sound of bubbles as the beverage was being poured on camera. Suzanne Ciani won the contest. (Many of you know Suzanne as a pioneer of electronic music... she was also a first class sought after commercial composer back then). With AMSR all the rage, the Superbowl in 2019 debuted Michelob Ultra as the world first AMSR beer opening commercial.

Blue Coast Records has been releasing a series of relaxation and focus music under Qua Continuum (an ensemble featuring Brain - Bryan Mantia and Cookie Marenco). In every album there were sound of nature gathered for use in the music and combined with electronic and acoustic instruments. These hour long tracks can either lull you to sleep or be your companion for a reading a book.

Some engineers have been aware of the "chill down the spine" feeling when recording music.  It's a feeling that brings on an unexplained sensation accompanied by overwhelming sensations of bliss or reflection and often leads to tears.  Here's an example of artist Meghan Andrews performing "I'm On Fire" that has brought many a grown man or woman to tears.

Let us know if you have a favorite AMSR moment.  Leave a comment below.