Will DSD downloads get lost in the world of streaming or become darlings like vinyl?

Will DSD downloads get lost in the world of streaming or become darlings like vinyl? 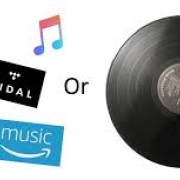 Digital downloads seem to be the losers in the battleground for the music listeners attention if you look at the decline in sales. But, will this still be true 5 years from now? People thought the CD would clobber vinyl sales when it first emerged... and it did for awhile, but now we see declining sales in CD and growth in vinyl sales. Will the same thing be true for DSD downloads?

Those of us familiar with DSD know how much we love the sound. When recording in DSD there is more dynamic range and greater depth in the image. Still, many HD consumers have moved to streaming for convenience. Streaming is available on your smart phone or computer with seemingly endless tracks available and a cost that seems so cheap, why wouldn't you spend $10-15 a month to have 40 million tracks available to you.

For many people, radio broadcast was 'enough' music to keep someone filled with joy and entertainment. In that same way, streaming has filled a gap radio once had. Most people don't spend the time to create a personal playlist and instead find a suitable "playlister" whose taste you can identify with. Maybe you'll discover a new track or two.

But for the serious listeners, even streaming doesn't offer the true benefits that downloads can. Downloads won't stutter as you playback. You won't be subject to higher data charges as you stream bigger, better sounding files. But maybe most important, the listener won't be subject to the software designs that are implemented with every streaming service. Just like the FCC put a 1000:1 compressor/limiter cap on radio, these streaming services make their own determinations of what the gain structure will be that their fans hear.

We're also finding out that between the distributor and the dsp (the retail digital store - streaming or downloads) there could be a "delivery" company who takes the original file and uploads their conversions to the dsp. Yes, it's true and we've found it... more on the subject later.

This won't happen with a download from a trusted source like Blue Coast Music
https://bluecoastmusic.com or other well known DSD providers.

But will DSD downloads stand the test of time... and hold out long enough to prove the point of their fantastic sound? Will DAC manufacturers continue to build DSD DACs? Similar to the "demise" of vinyl in the early 90's, vinyl came back with a vengeance. We believe that will be the case with DSD downloads as well.

That said, many companies may fall to the wayside finding it financially difficult to maintain a digital DSD download store with rising costs of online storage and bandwidth. At this time we are sad to announce that Superhirez.com (Acoustic Sounds Hi Rez store) will be closing on January 1, 2021. They fought the good fight for seven years but the move to streaming by former HD listeners led to this decision. There are other related costs that contributed to their decision.

We wish them well and know that their move to vinyl was a timely one.

We still believe in DSD and plan to continue on our path with your support.